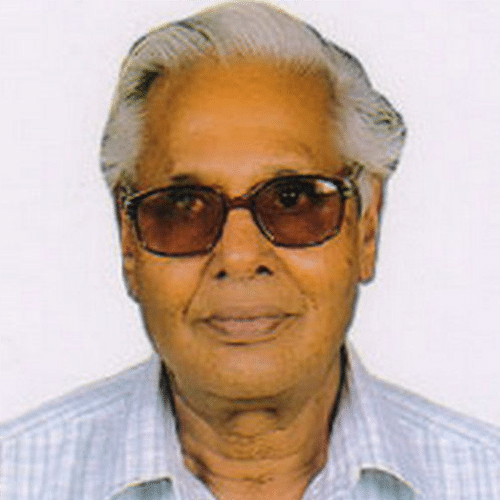 Dr. Sohan Lal Gandhi is currently the Honorary President of the ANUVRAT Global Organization (ANUBIS), a transnational Center for Peace and Nonviolent Action associated with the UN-DPI. Dr. Gandhi began his career as a post-graduate professor of English in Kendriya Sangathan, HRD Ministry, Government of India. He has been in the forefront of national and international campaigns for disarmament, interfaith harmony, reconciliation, nonviolent conflict resolution, global ethics, ecological and environmental harmony, vegetarianism, and regeneration of moral and spiritual values. Dr. Gandhi has long been a member of the Jain Community Peace Movement.

Dr. Gandhi is on the boards of many national and international organizations. He has received numerous honors including the Intercultural Open University Foundation Peace Award in 2000. He currently is the editor of the ANUVIBHA Reporter, and has authored and edited many books and articles.
Dr. Gandhi holds the rank of Professor of Sociology and serves as the chairman of Peace and Nonviolence Studies at Intercultural Open University Foundation. In addition he serves on the Board of Governors.

Vision, Goals, And Purposes of My Work

I have a vision of a socio-political non-violent world order free from exploitation and injustice. It can become a reality only if we succeed in instilling ideals of ahimsa and tolerance into children at an early age. We need to launch a global programme of action embedded in the culture of peace and nonviolence for the children of the world. It calls for a worldwide campaign to train and educate the children in the healing power of ahimsa which alone can ensure survival into the third millennium. Religion should be used as an instrument for reconciliation, harmony, co-existence and self-transformation. Its misuse for creating divisions and inciting violence and hatred must be stopped at all costs. The goal of my life is to inspire people to make nonviolence a way of life and embrace reverential ecology as expounded in Jainism which recognizes the sanctity of all forms of life on this planet. I fully support His Holiness Acharya Mahapragya’s view that verbal, mental or emotional forms of violence are far more dangerous and devastating than physical violence. Unless efforts are made to control mental and emotional violence and enhance children’s emotional intelligence, we cannot prevent catastrophes like the one witnessed on September 11, 2001. The purpose of my life is to work for the alleviation of human suffering and promote the culture of ahimsa as revealed in Lord Mahavira’s message and the message of Mahatma Gandhi.

It relates to nonviolence and peace education, nonviolent conflict resolution, economics of nonviolence, training in nonviolence, Jainism, Jain Ecology, spirituality, and religious reconciliation. I have been popularizing ANUVRAT MOVEMENT based on a carefully drawn moral code of conduct at global level. The word ‘ANUVRAT’ means a ‘small or basic vow.‘ The mahavrats (vows that are great or big) are meant for ascetics (shamans).

ANUVRAT MOVEMENT, launched by the leading Jain religious leader of India, Late His Holiness Ganadhipati TULSI, in 1949, is a Jain peace movement which persuades individuals to commit themselves to certain basic human values. It encourages interreligious dialogues and promotes interfaith unity. Acharya Tulsi was inspired by Lord Mahavira’s twelve anuvrats – a code of moral conduct consisting of twelve small vows prescribed for his shravaks and shravikas (Jain lay persons). He converted it into a mass movement after making some modifications in accordance with the needs of the present age. All conflicts originate in the degeneration or loss of these values. To achieve peace the rejuvenation of these basic values is a must. ANUVRAT MOVEMENT aims at moral and spiritual regeneration of the individual and society. One of the vows relates to ahimsa. This movement considers nonviolence as the only way of freeing this world from conflicts rooted in racism, fundamentalism and terrorism and of preserving ecological and environmental balance and expects its adherents to practice minimum nonviolence in life. At present, the Anuvrat Movement is being led by His Holiness Acharya Mahapragya, a renowned Jain ascetic, scholar and exponent of Preksha Meditation.

Other Presentations made at IPRA’s 40th Anniversary Conference:

Talks/Interviews in Newspaper and Radios Abroad

I have translated into English, authored, and edited the following books: (All of them, except one, have been published.)